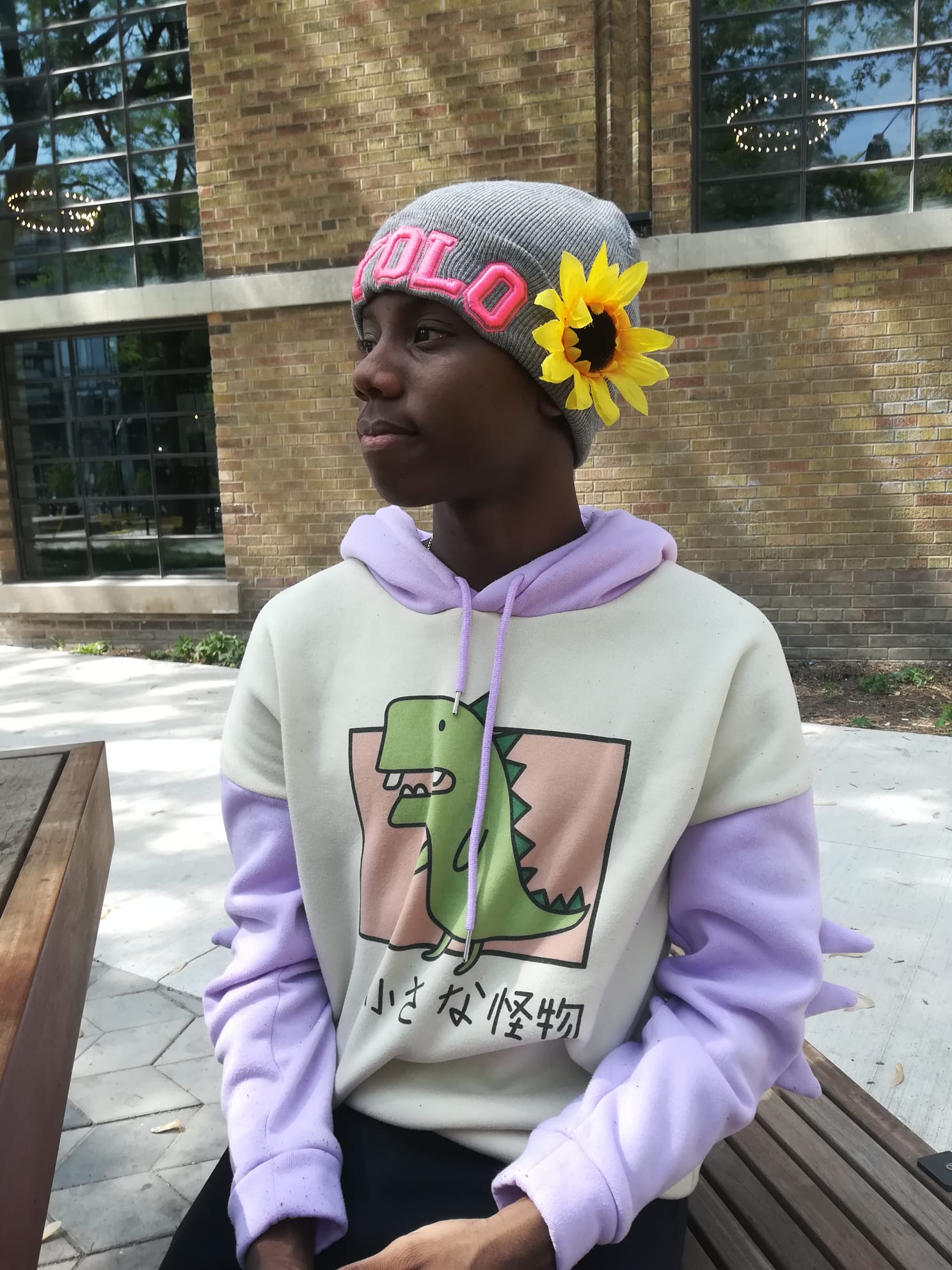 My name is Tariq, a 20 yr old Black Caribbean male originally from San Fernando, Trinidad and Tobago currently residing in Toronto Canada. I caw caw caw cawed (in translation that means flew) over to Canada in September 2019 and since then have been grateful for all the opportunities that have been given to me. I lived in an as some an alyuh would say “hood” area where I tried and failed miserably to hide my sexuality but if I’m being honest anybody who believed I was straight was clearly reading a different book than me.

Some things I’m really passionate about are the performing arts mostly dance and music as well as Pokemon cus duh I’m into cartoons and anime. I also enjoy reading comics cus I enjoy Marvel and manga cus who doesn’t like a gay who could do both. I also have drag persona Cyanide Ceed who got their name and demeanour from my younger sister back when I didn’t really know what Drag was. We were watching MPGIS (Most Popular Girls In School) when we were a little young I’m not gonna lie and we thought of a character I would play if I was a part of the show. The character was a sassy girl who would not dress according to school policy and had her own way of speaking often in the third person. I don’t think my sister knew what she was doing back when we made this character.

I don’t like photos cus I feel like a troll when I take them which is why my phone is flooded with videos not pictures. Whenever I spoke I was usually told I speak too fast and I need to enunciate my words and speak a lil proper. When I did, however, I was told I sounded either very proper or like a Freshwater Yankee (which is basically somebody who went to the States for a short time example 3 days and then suddenly has an American accent) mind you other people may have different definitions for this term but this is the one I know. Since coming to Canada I had to “hide” my accent as most people didn’t understand the words flying out my mouth and the fact that I spoke too fast didn’t help. Second is the assumption that every Caribbean person and island is actually from Jamaica (i still don’t understand this, like there are other Caribbean Islands people).

Dancing has also been a part of my life since I was a child but because the style of dance I was interested in was viewed as feminine I never really got into it until Secondary School. School really wasn’t the reason I started it was mainly because of a video from the show Bring It where Miss Diana the head coach did a heel stretch and basically said in the confessionals that you wish your legs go up that high and that it may happen in your dreams. My dotish self took it as a challenge and trained to do the trick on my own and later got obsessed with the show and how they danced and tried my best to copy every trick the Dancing Dolls would do.

It’s important for me, to be a part of this community and be able to do things that help because I didn’t have that growing up. I didn’t really have a space where I could be myself and have people care for me without an ulterior motive or being scared to be around me because of my sexuality. Even though I did have friends who cared for me back home I didn’t feel safe to be my authentic self for even when I wasn’t presenting as gay (which is dumb in of itself) I would be a

target for unnecessary hate and abuse. I personally want a place that Queer people of all ethnic backgrounds can be seen and feel heard without feeling like a burden. This part specifically applies to me and what I did during my time after SOY (Supporting Our Youth) as I was supposed to continue and be a part of Sherbourne Health but pulled away as I was going through the Refugee process and didn’t want to be a burden. Even though they had supports like housing and groups made specifically for youth going through the process I felt like I was always a burden and pulled away from people who actually cared for me and my well-being.

In the end was able to stay connected and have the support of this community and luckily thanks to all my experiences and now being registered as one of the 12 Disciples of Gay Jesus I can give back to this community period!

When I first came to Canada I volunteered at the West Scarborough Neighbourhood Community Centre ( a bunch of lovely people by the way) where I was supported in life skills and I was a math tutor for a short time (I know my friends are laughing cus didn’t pass maths back home). One of the organizations I worked for was Sherbourne Health being a part of the SOY (Supporting Our Youth) where I trained to be a Peer support leader which is kinda funny cus I’m scared of people and I don’t really know how to talk to them but I know how to talk to people (I know that made no sense but bare with me). I met so many wonderful people there who helped me learn more about LGBTQ+ terminologies as even though I’m a part of the community I would never claim to know everything.

Through FLAME (Fruit Loopz Artist Mentorship Project) I did a live dance performance at Pride Prom in 2021 through Zoom (cus yunno Miss Rona wanted to be an issue) this was my first “public” queer experience as I never really posted myself being outwardly gay and just having fun. At this point, people knowing my sexuality really wasn’t their business. Later on in the year, I was then asked to do another performance for SOY’s Annual Game Night/Fundraiser. This was another dance performance on Zoom but this one I had to record as doing the live performance at that time was impossible.

As I pulled away from anything to do with people knowing who I was as I still really wasn’t into that, I ended up secluding myself which wasn’t a smart idea as that decision ended up doing more harm than good to my mental health. I am currently a part of my youth committee at the Transitional Housing where I live at. I am also a part of a group of young mostly Queer Youth (I think there’s like one straight guy idk) and we are in the process of making a comic that focuses on Queer Youth but also Mental Health Issues. We are not planning on trying to release the comic as it was only supposed to be for the program we were doing but if it turns out as we hope it would we just might. Now that my stay in Canada is somewhat secured a weight has been lifted off my shoulders but now I feel like I should be helping others who are going through the same struggles I was and still am going through as the people who worked with me never gave up so I should pay that kindness and dedication forward.